If you can’t feel the electricity charging the atmosphere in your workplace, then you may have lost touch with your senses. Equal amounts of fear of another recession and hope for a brighter future have come together as an emotional storm.

Emotions matter immensely. We collected a sample of 716 leaders in virtually every kind of organization, from hospitals to banks and churches to casinos. Measuring these leaders with the 360° Refined™ leadership assessment, we discovered that nearly 70% of those leaders whom their peers, direct reports, and board members rated highly in emotional intelligence (EQ) also ranked among the most skilled decision makers. In contrast, guess how many of those with a poor grasp of their own emotions ranked among the top echelon of decision makers? Zero. In fact, 69% of low EQ leaders also ranked in the bottom 15% of decision makers. 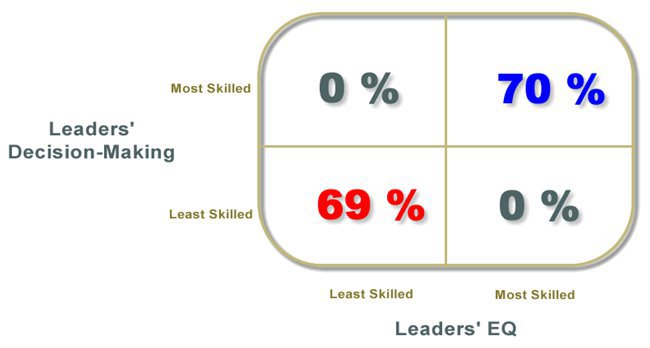 Based on our past research, we expected to find some difference in the quality of decision making between high and low EQ leaders. However, the magnitude of this difference surprised us all. It underscores an enduring misconception many leaders hold about the decision-making process. Most leaders today—even if only begrudgingly—will readily discuss the role emotions play in their relationships with employees, partners, or customers. But most leaders almost never consider how emotions affect each of the hundreds of decisions they make every day. We have been taught to believe that decisions should be coldly rational, so most people assume that decisions are coldly rational. That misinterpretation is not just silly. It is costly.

To illustrate, a team of Princeton researchers led by cognitive psychologist Alan Sanfey resurrected a classic experiment known as the “ultimatum game” in which researchers put two people together and ask them to split a sum of money. One player gets to determine what the split is, and the second player gets to determine whether he wants to accept the split or reject it. If the second player rejects the split, neither player gets any money. In a purely logical world, the first player is supposed to recognize her advantage and offer a lopsided split in her favor. The second player is expected to accept the uneven split regardless of how unfair it might be, because any amount of money is better than nothing. Rationally, who cares if it is unfair? In reality, nearly everyone cares. That is why most people end up offering a fifty-fifty split to the second player.

But some socially unaware players do try to cash in on their perceived advantage and offer the lopsided split. Guess what the second player does when offered an uneven split? He rejects it, knowing full well that both players will walk away empty-handed. Using a functional MRI machine, Sanfey’s team discovered that when people are offered an unfair split, a primal part of their brains known as the anterior insula lights up. The second player’s anterior insula sends out a signal of disgust and anger on which he bases his decision to reject the split. It doesn’t matter that rejecting the split—no matter how unfair—is an irrational financial decision. It feels like the right choice.

The TalentSmartEQ discovery and the Princeton experiment drive home one vital point: A poor understanding of emotions such as fear, resentment, or even excitement doesn’t just make it hard to play nice with others. It prevents us from maximizing our investments, negotiating good deals, and ultimately growing our business. That is why emotionally intelligent leaders who “strive to make the most out of situations” (i.e., accept a good deal even if it feels unfair) and “take responsibility for their part in difficult situations” (i.e., recognize that they are responsible for offering the unfair split) are infinitely more capable of “making good decisions in a timely manner.”

Think about the last time you conducted or participated in a training session aimed at teaching new managers or seasoned leaders how to make better decisions. I’ll bet it had a lot to do with analyzing options, comparing risk/reward ratios, and maybe even playing some fun problem- solving games. This type of left-brained approach is sufficient only to the extent that the demands of our jobs mimic a math test. Research clearly tells us that logic is important, yet irrelevant if you ignore emotions.

Lac D. Su is the Director of Strategic Alliances for TalentSmartEQ, the leading provider of emotional intelligence tests, products, and training. He forms and manages relationships with key TalentSmartEQ resellers and assists clients with the implementation of skill development initiatives.