Fear of the Unknown: Don’t Let it Sabotage Your 360

Why is it that some leaders get so much from the 360º process, while others just seem to get defensive and learn very little? What a leader gleans from 360º feedback has everything to do with how he/she is coached through the fear of the unknown.

Take Bruce, for instance, VP of Operations at a successful software manufacturer. He reached his position through a great deal of hard work and dedication, earns a nice salary and is respected for his knowledge of the profession. When Tina, his new coach, asks what he anticipates from the upcoming 360º evaluation of his leadership skills, Bruce responds with a confident, “I’m a strong leader, so I think that will be reflected in my scores.”

Tina designed the company’s 360º feedback initiative to teach leaders what they don’t already know. She is careful as she explains to Bruce that new leadership skills are what will take his game to the next level tomorrow and ensure the continued success of the company. As Bruce nods his head passively, Tina can’t help but think that teaching someone who does a good job that they can do more is not an enviable task. She reminds herself that this responsibility is a powerful one, and one that can change a leader forever.

Over the next few days, Bruce and Tina finalize his raters via email. They decide Bruce has two supervisors, five peers, six direct reports, and two internal customers who are familiar enough with his leadership skills to provide meaningful ratings. They decide to launch the survey that day and they set a meeting for the end of the following week to go through the feedback.

Back in her office, Tina hops online to send out Bruce’s survey. In less than 10 minutes she has the emails, deadline, reminder frequency and customized message entered into the administration page. Before clicking send, she pauses for a moment to reflect upon Bruce’s final comment, “I’m sure our coaching session next week will be quick.” As she clicks the “Send” button, she can’t help but sense that the opposite will be true.

Before heading out the door on Friday, Tina hops online to check the progress of Bruce’s survey. She sees that 8 of 12 raters have responded and, strangely, the four missing respondents are his direct reports. She adjusts the reminder message to make it clear they have just a few days left to participate and the survey is anonymous. She grabs her car keys and, as she approaches the building’s exit, notices a single office in the operations department that remains illuminated. A closer look reveals it’s Bruce working furiously behind mounds of paper.

The following Wednesday, Tina goes online again to find that 11 of 12 raters have responded. She creates his feedback report with one click of her mouse and discovers the obvious. Bruce’s scores for strategic thinking, expertise and use of leadership authority are very high, but his scores for managing his time and developing his direct reports are lagging. 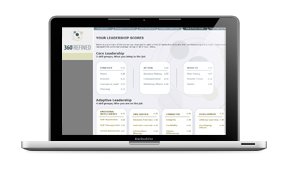 Upon closer inspection of Bruce’s leadership score profile, she discovers he receives high marks in the qualities the assessment terms Core Leadership. That is, he’s good at Strategy, Action and Results, the three competencies that tend to get people promoted into leadership positions. Bruce has clear room for improvement in the Adaptive Leadership competencies. These skills, such as emotional intelligence and mentoring, are critical for leaders who wish to take their game to the next level.

Tina has little chance to explain this to Bruce in Friday’s meeting. As soon as she walks through the door, he announces an emergency trip to Singapore for a meeting, and cuts their meeting to 25 minutes so he can catch his flight. Tina barely has time to introduce his results before being escorted out the door. She stops in the doorway and tells him to check his email, as he’ll be receiving a link to his feedback report, accessible online. Tina also assertively suggests he get familiar with his data and try the e-learning activities before his return. 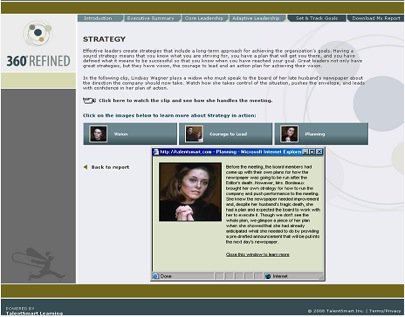 The meeting after Bruce’s return from Singapore is 70 minutes long, yet equally counterproductive. This time, Bruce does all the talking. He rationalizes the circumstances behind his low ratings and seems to take no pleasure in the areas where he has high marks from others. Only by pointing him to the specific comments made in the open-ended questions is Tina able to make some progress in getting Bruce to “own” his results and see opportunities for change.

They reach their fifth meeting before Tina has a real breakthrough coaching Bruce. They spend this session discussing the Accuracy Table, a pie-chart analyzing how close Bruce’s self-ratings are to the ratings from his coworkers. Tina explains that most leaders over-estimate some of their skills, under-estimate other skills and have an accurate perception of others. She shows Bruce how his chart follows this trend and reveals which areas his perception is not inline with what others see him doing on a daily basis.

For Bruce, and many other leaders who go through a 360º survey, it takes time to absorb the data and accept it as something that is extremely important. The tendency in corporations today towards “drive by” 360’s (here is your score—now use it) only makes it harder for leaders to do something productive with their feedback. So, how do things turn out for Bruce?

His relief in later sessions is palpable. He begins using the e-learning content in earnest and is diligent in responding to the reminders sent to him by the Goal Tracking System™. By the time the 360º process rolls out to the next layer of management, Bruce is one of the biggest advocates of Tina’s program. Working with Bruce ends up as one of the biggest challenges of Tina’s year, but she can’t help but feel it’s worth it. Don’t all leaders deserve the same?

Lac D. Su is the Director of Strategic Alliances for TalentSmartEQ, the leading provider of emotional intelligence tests, products, and training. He forms and manages relationships with key TalentSmartEQ resellers and assists clients with the implementation of skill development initiatives.