Things have been tense in the office for awhile now, but last Friday, it came to a head. Jane, the talented and outrageous marketing director for a global apparel company, stirred up trouble—again. One of her staff made the mistake of pushing an idea in a meeting that was different from Jane’s, and instead of hearing him out, Jane publicly berated his idea. After the meeting, doors slammed, whispering and gossip ensued, and her direct report left the office early and in tears. Jane’s behavior had finally reached the point where her boss couldn’t look the other way. Jane is “that one” who for years has been allowed to behave badly because she delivers so smashingly well.

Now Human Resources needs to figure out how to help this highly educated, numbers-driven, and painfully difficult person to soften her approach. When HR asked about her outburst, Jane nonchalantly and confidently stated, “you know, it’s just who I am and how I’ve always been.” With one staff member already out on a stress claim, Jane is headed for coaching, not realizing how close she is to being fired and ruining her career.

“It’s just who I am” is one of those classic excuses people use to explain bad behavior in and out of the workplace. We may not be as harsh as Jane, but we’ve all had moments when we are our own worst enemies. For Jane, these moments have added up to the point where—like a leak in a tire—she is slowly deflating all the progress she’s made over the course of her career.

How can this excuse ruin a career? In short, it’s an excuse for bad behavior that’s both avoidable and can cause a lot of damage in the workplace. Jane is describing what she thinks is her personality. Personality—or who you are—is the collection of your motivations, needs, and preferences (like preferring groups to working alone, or having a serious side versus a lighter side). By your early 20s, your personality traits have stabilized and won’t change. How you behave is partly driven by your personality and by a set of skills called emotional intelligence (EQ) that you can acquire and develop throughout your life. By using EQ skills, Jane could have chosen a better response to her direct report that wouldn’t have jeopardized her career.

There are actually five excuses that Jane leans on when behaving badly. In addition to being lame, these excuses can each ruin her career. Let’s take a look at the beliefs that fuel Jane’s excuses and the insights that can save her from falling prey to these lame responses.

Don’t Settle for Excuses and Chance Ruining Your Career

The excuses above got in the way of Jane’s success, and they can get in your way as well. Today, there’s not much room for excuses. Trying on new roles, being flexible, adapting to change (and the stress that accompanies it), and our skill at creating and nurturing relationships are all requirements at work today even if it’s not in our nature to do so. Thankfully, emotional intelligence is a set of skills that can be learned, so we don’t have to settle with “I am who I am” or any other excuse, no matter what our natural preferences are.

What You Can Do

Say goodbye to excuses and become more aware of your personality and your EQ skill level. Make learning about yourself and others a regular part of your lifelong professional development journey—not just a pit stop when you spot trouble ahead. Since personality is who you are, and EQ gets you where you need to go, you can work on both in tandem because they work together to increase your self-awareness and build on your strengths.

We all possess the distinct qualities of IQ, Personality, and EQ, and together they determine how we think and act. Of the three, though, EQ is the only quality that is flexible and able to change. 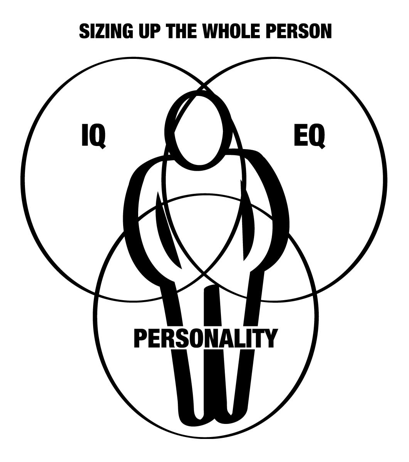 Jane’s bad behavior on Friday was the beginning of a self- awareness journey that HR asked her to take. With the help of a personality assessment (IDISCTM) and the Emotional Intelligence Appraisal®, she found that her behavior, excuses, and blind spots limited her performance as an effective leader. For the first time, she saw the disconnect between how she’s been operating and the ripple effect of her choices, that change is possible, and that delivering results isn’t enough—she’d need to be successful working with and through other people along the way.

TalentSmart® Has Solutions for the Jane In All Of Us

We’ve all been in Jane’s shoes at some point. If you’d like to learn more about your personality and your emotional intelligence, try one of these:

Sue DeLazaro leads TalentSmartEQ’s train-the-trainer certification sessions for training professionals around the world and prepares organizations to roll out EQ-based initiatives. In May of 2011, Training Magazine featured Sue as a Top Young Trainer award recipient. Sue is a contributor to TalentSmartEQ’s latest book, Emotional Intelligence 2.0 and holds an M.S. Degree in industrial-organizational psychology.