There Is No I in Team

NBA basketball teams lean on the performance of marquee players, many of whom live the repeated sentiment of the great Michael Jordan, “There is no ‘i’ in team, but there is an ‘i’ in win.” Jordan’s team, the Chicago Bulls, won six NBA championships during his tenure. But where would the Bulls have gone without him?

Superstars at work, similar to superstars in sports, are famous for creating chaos. They often turn the concept of team into a one-man show, leaving everyone else in the dust. We’ve all worked on projects in which the same amount of work—if not more—could’ve been completed individually. Which begs the question, why form work teams in the first place?

Ever been in a meeting when ideas were flowing, everyone offered his or her unique perspective without the fear of ridicule, and tasks were accomplished with ease and efficiency? Neither have we. But at TalentSmartEQ, we’ve worked with hundreds of teams, and addressed hundreds of thousands of individuals, and the quality that separates those teams that work together efficiently from those that fall apart is team emotional intelligence. You see, just as an individual has an emotional intelligence score, or EQ, so does an intact work group.

A 2006 independent research study at Alliant International University measured the Team EQ of intact work groups, and compared the Team EQ scores to overall team performance. Team EQ scores not only predicted performance; they had a direct, linear connection to group productivity. The higher a Team’s EQ, the more the team achieved. Team EQ was the single determining factor between groups that achieved peak performance and those that achieved moderate to average performance. 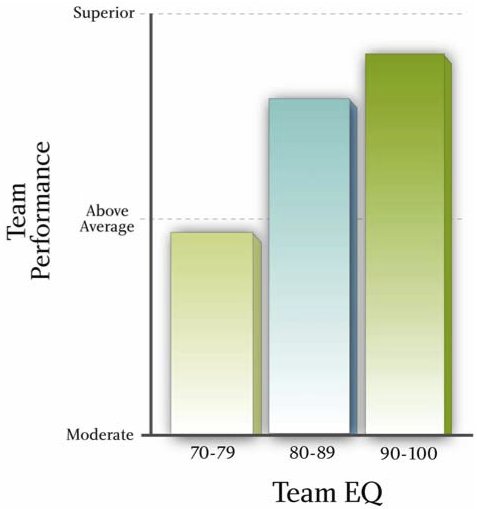 Why does a team’s performance increase with the collective EQ of the group? Team EQ embodies the group’s ability to manage emotions under stress, build trust, and come together as a cohesive unit. Groups with a high Team EQ work diligently to understand one another and face the negative tendencies that—if ignored—can hinder progress.

Emotional Awareness: A team’s ability to accurately identify the emotions in the group and understand each member’s general tendencies for responding to situations.

Emotion Management: When team members respond to the emotions in the room and the group’s overall mood to manage emotions constructively and achieve team objectives.

Internal Relationship Management: When team members interact with each other effectively to better respond to difficult situations within the group.

External Relationship Management: A team’s ability to interact effectively across the organization and with outside parties.

Your team doesn’t have to leave stellar performance to chance—a high Team EQ is within your control. You can test and identify your group’s strengths and weakness with the Emotional Intelligence Appraisal–Team EQ Edition. This online assessment lets your entire team (up to 26 members) test the group’s ability in each of the four Team EQ skills in minutes.

Dr. Jean Greaves is the co-author of the bestselling Emotional Intelligence 2.0 and the cofounder and CEO of TalentSmartEQ, the world’s leading provider of emotional intelligence tests, emotional intelligence training, and executive coaching. Her bestselling emotional intelligence books have been translated into 25 languages and are available in more than 150 countries. Dr. Greaves leverages her twenty-five year track record of consulting, speaking and applied research. She has written for, or been covered by, Newsweek, Fortune, Forbes, The Wall Street Journal, The Washington Post, and The Harvard Business Review.