When was the last time you were able to fully exhale and enjoy what’s truly important in life? I’m talking about the kind of deep reflection that sends tingles down your spine, deflating the size of your daily hassles. For me, it’s the feeling I get when I arrive home after a long day of work and gaze into the innocent eyes of my newborn son. Whatever your moments are, they are rare spots of time that leave you thinking, “This is what it’s all about.”

These days, the work-life balance scale is tilting heavily towards “work.” More than 80% of Americans average 40+ hours on the job, and half of those put in 50+ hours each week. Summer, though on its way, doesn’t look like it will be providing much relief this year. A national poll conducted by GfK Roper Public Affairs & Media shows that one third of Americans have already canceled at least one summer trip due to financial concerns. People still holding jobs want to keep them, and they’re spending more time at the office to make sure their presence is felt.

We all know that time spent at work is rife with stress and challenge, but few realize that blindly diving into your work actually reduces your job performance. Why?

Consider how Steve Whitley spends his workday. Steve is a seasoned project manager who starts each morning with a 10-minute cup of coffee. Actually, he spends just 30 seconds of it drinking. He squeezes massive gulps in between clicking through emails, jotting down voicemails, and rummaging through a mile-high stack of documents. Some mornings, Steve doesn’t even glance out at the panoramic view through his fourteenth story window.

Downing coffee is not a sign of mind blindness, but powering through your day without stopping to contemplate your behavior is. Steve invests little time in self-reflection and often finds himself denying his fatigue, chasing lofty goals at the expense of his health, and failing to fulfill the needs of his employees. Steve takes obsessive precautions to ensure her team doesn’t make any mistakes. At a meeting, he details tasks for each team member to accomplish the following week, and then decides to take care of half of them himself without telling a soul.

Why would Steve create this kind of stress for his team? The short answer is he’s wired to. Biologically speaking, we’re built to do one of two things in the face of a threat or danger: run really fast in the opposite direction, or stand our ground and fight like a champ. Deciding on a rational action during a heightened state of emotion is secondary to our survival instinct. In Steve’s case, he’s fighting like a champ. Any manager is going to respond to a project deadline with at least mild anxiety. Even if he isn’t completely aware of it, Steve is likely to feel that his job is threatened by the chance of failure. To make things worse, he doesn’t have control over how and when all tasks are completed.

Steve micromanages his staff when his emotions get the best of him. Everything we experience passes first through the emotional part of our brains, called the limbic system. A trigger event, such as a new deadline to meet, is “felt” by the limbic system before we have any rational reaction to the circumstance. So, we fully experience the anxiety, exuberance, or irritation of a moment before the rational part of the brain gets a crack at choosing the direction to head in response to the situation. Steve reacts to his anxiety about trusting the abilities of his team members. He is likely unaware of this emotion, and doesn’t recognize the impact of his actions on those around him. 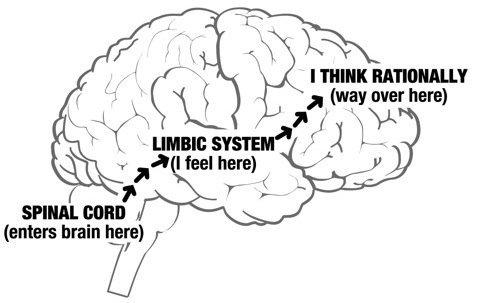 And Steve isn’t alone. TalentSmartEQ® studied more than 500,000 people in preparing Emotional Intelligence 2.0 and discovered that just 36% of us are able to accurately identify our emotions as they happen and more than 70% of us experience great difficulty handling the conflict and stress that inevitably surface at work. With so few people able to understand their emotions as they happen, the stresses of the workplace are quick to impede performance. And they don’t just halt our progress while we’re at the office: 87% of the people we tested found their personal lives greatly impacted by their work.

Taking The Blinders Off

Mind blindness happens when we lose focus on the circumstances that surround us and let defining moments drift by beneath our awareness. Emotional intelligence offers a way out by teaching us the skills needed to know what, when, why and how our thoughts and emotions influence our actions. Building EQ ensures that you manage the pivotal responses needed to stay productive and do more with less.

How might Steve look after increasing his emotional intelligence? The most profound difference he’ll experience won’t be visible to the outside world. When someone develops new emotional intelligence skills, his brain cells grow new connections that facilitate the continued use of the new behaviors. A single brain cell can grow 15,000 connections to help it communicate with its neighbors. By practicing new EQ skills, Steve literally strengthens the communication between the parts of his brain that are responsible for feeling emotions and thinking rationally. This physical change helps him—when faced with a similar deadline—to delegate responsibilities and resist the urge to micromanage.

Emotional intelligence (EQ) explains almost 60% of an individual’s job performance. The four EQ skills (self- awareness, self-management, social awareness, and relationship management) are so embedded in everything we do and say each day that it’s no surprise they hold sway with job performance. The trick is that self-awareness, the first of the four EQ skills, is a critical first step to increasing EQ. It’s hard to choose a new course of action if you don’t even know it’s there.

Anyone can make major leaps in productivity by simply measuring her EQ and increasing those skills she needs the most. EQ tests are useful because people need an objective evaluation of their behavior. A scientifically—validated test paints a clear picture of an individual’s behavior—what they do and say each day.

When we released the Emotional Intelligence Appraisal® seven years ago, it rose quickly to become the world’s bestselling EQ test. It’s a fast, accurate and intuitive measure of EQ that is trusted by more than 75% of Fortune 500 companies. But that’s not to say it cannot be improved. Earlier this year, we reached out to our very best clients—those who use the test the most and are intimately aware of its beauty and blemishes—to gather their wish lists. They told us what they would love to see the Appraisal® do, and their ideas were marvelous. We’ve been working diligently all year long to make these enhancements a reality, and today we’re proud to release the new Emotional Intelligence Appraisal®.

In addition to a new look and feel, the enhanced Appraisal® pinpoints the behaviors that bring your EQ score down the most, and shows you how to improve in these areas: 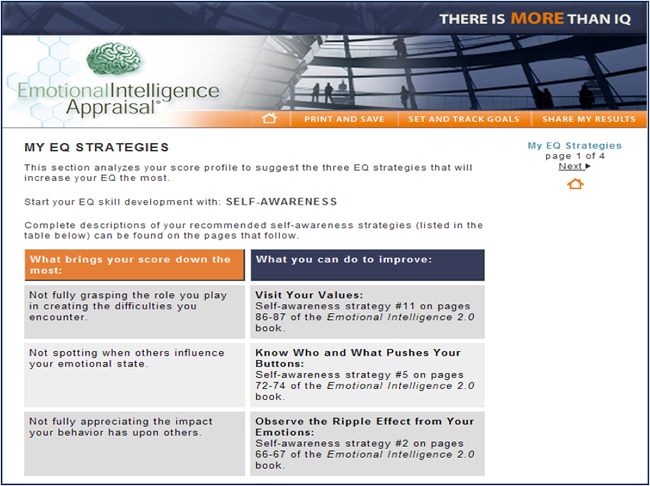 Once you’ve had sufficient practice with your EQ strategies, it lets you test your EQ a second time (at no additional charge) to measure your progress: 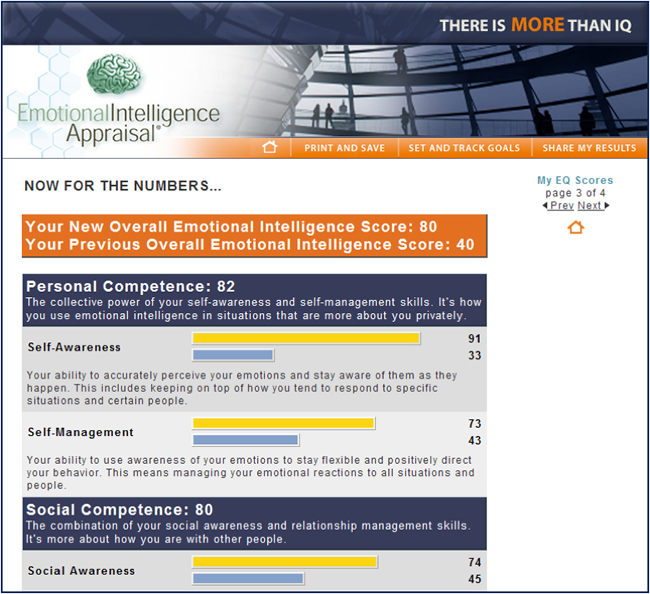 If you enjoy using these features half as much as we did creating them, I have a hunch that the emotional side of work will no longer be obscured from sight.