In 1928, Harvard psychologist William Marston published a treatise that changed the way the world viewed personality. Marston observed human personality existing along four unique dimensions, or traits. Marston’s four personality traits are referred to as the DISC model, which is an acronym for a person’s tendency to be Dominant, Interpersonal, Steady, or Conscientious. Though the DISC personality traits represent needs that are important to everyone to some degree, knowing which are most prevalent in any person is the key to understanding personality.

People high in the “Dominant” trait are direct and assertive. They think independently, are ambitious, and take a quick and active approach to solving problems. Dominants are competitive and enjoy a challenge, even when the odds are stacked against them. They have a strong need to achieve and try to maintain a measure of authority and control over the environment in which they live and work. Other people find Dominants determined and strong willed, which is no surprise, as Dominants like to have things done their way.

People high in the “Interpersonal” trait are entertaining and social. They like to participate in groups and rely on their social skills as the primary means for getting things done. Highly extroverted, these people are considered by others to be friendly and outgoing. They express their feelings and are generally more comfortable with emotions than others.

People high in the “Steady” trait are persistent and patient. They take a measured, stable approach to life and don’t like surprises. They are accommodating and undemanding, often showing intense loyalty to those around them. Steady people place a high value on sincerity; they habitually tell the truth and expect others to do the same. People tend to see Steady people as deliberate and consistent in their approach to life, which can lead to the label of being predictable. Steady individuals possess an unusual level of persistence, and can maintain their focus and interest in something longer than most others can.

People high in the “Conscientious” trait are interested in precision and accuracy. They like structure and details, and they focus intensely on the facts. They regard tradition and etiquette as highly important and will extend great effort to support such mores. Conscientious individuals tend to use a systematic approach to their activities, and will insist on the use of rules in order to manage or control their environments. They are understated and indirect in approaching conflict and may postpone taking action until it is absolutely necessary. This can lead others to see Conscientious people as passive and compliant.

Marton’s DISC model captures what people tend to think, feel, and do as a product of the inherent tendencies of their personality. There are certainly more layers of depth to the DISC model─and we will explore them in later chapters─but the image of the DISC model of personality provides a quick visual to illustrate the global differences among the four DISC personality traits. Along the vertical axes, the traits are distinguished by the general tendency to be active or reactive to things. That is, do I tend to act quickly when things change, or am I more likely to sit back and see how things play out first? Along the horizontal axes, the traits are distinguished by the general tendency to focus more on tasks or people. We all lean unconsciously toward one or the other. 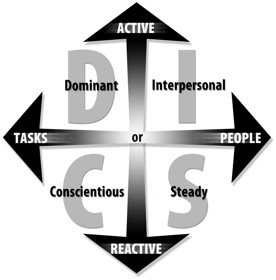 DISC personality profiling first gained prominence during the massive buildup of the U.S. military during the Second World War. Assessing the DISC profiles of new recruits provided an objective method for matching them to the right assignment. The military lacked a DISC test and relied upon hours of interviews and interpretation by psychologists for each recruit.

Still, the DISC profiles eliminated a significant amount of trial and error in getting a new soldier to the right placement. After the war, many of these soldiers brought the DISC model with them into civilian life. They were instrumental in spreading the word that produced a silent movement dedicated to the continued study, use, and refinement of the DISC model long after Marston’s death in 1947. For several decades, this movement has endured, thanks to a cadre of academics and trainers who recognize the value of DISC profiling and have the training necessary to use it. So far, they’ve helped 50 million people discover the source of their strengths, and DISC remains the most widely used personality model in the world today.

Decades of DISC research have led to three major improvements in DISC since Marston’s death. First, the terms in Marston’s model have been updated to keep the language current. The second improvement is rooted in the discovery that each of us is more than just a D, I, S, or C. Since everyone displays each of these traits to some degree, the trait that prevails doesn’t tell the whole story. A complete look at a personality profile comes in understanding how we blend these four traits. If you want to understand someone, it’s still important to know which DISC trait dominates, but the discovery of the fourteen unique personality types makes it even easier to know where people are coming from. These types are more than one-word labels; they identify the most recognizable and useful differences among people

The fourteen types provide a common language and understanding of how each of us responds to others, prefers to complete tasks, and manages time and energy. The third DISC innovation ensures that you can learn your type and personality profile. In the early years, understanding your DISC profile required hours of interviews and interpretation by psychologists. With the advent of the Internet and improvements in psychological assessment, it’s now possible to test yourself online to discover your personality profile quickly and accurately. While you can still learn a lot from this book without testing yourself, knowing your precise profile makes the learning real and serves as the foundation for how you understand personality.