Last night, Kevin rehearsed with his wife. On the drive to the office this morning, he grew even more confident that his boss would see things his way. After explaining to his boss that working remotely two days a week would not only improve his home life but also boost his productivity and engagement, how could she not agree with him? It was a no-brainer.

Unfortunately, it also turned out to be a no heart-er. Kevin explained himself perfectly, detailing how Jack and Olivia are at such busy ages now and how the layoffs at his wife’s company have meant longer hours for her, but his boss returned a blank stare.

That’s because what Kevin’s boss heard him say was I want to work less. Then, after a long pause (so that she could process the preposterous nature of this request), she responded, “More time away from the office just won’t work right now. We’re too short-staffed. But,” she continued, smiling gleefully, “I’m glad you dropped by because I want to talk to you about the meeting in Seattle next week…”

What Kevin’s boss heard herself saying was I’m addressing your request professionally because I respect you. And even though I’m turning down your request, I’m not a mean person. See, look at me smile. Kevin couldn’t figure out if she was clueless, heartless, or both.

This same scene plays out in offices all over the country every single day—one person is emotionally zigging while the other is zagging. When two-toned conversations happen in your office, which side of the desk are you on?

A lack of empathy does not necessarily stem from inherent rudeness. Even kind, well-intentioned people can lack empathy sometimes. Empathy is simply a learned skill that some people practice more often than others.

Research recently conducted by Michael Kraus at the University of California, San Francisco, shows that people with more education, wealth, and social status are often less empathetic because they perceive themselves to be less dependent on other people. The result of this misperception? They practice empathy less often, their emotional intelligence suffers, and they get out of touch with other people. 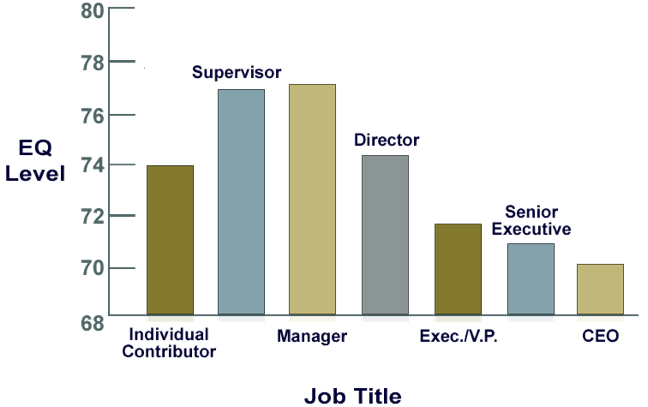 Our research with more than 500,000 people shows who in the workplace succumbs most easily to the empathy problems uncovered by Klaus’s study. Organizations reinforce this process by rewarding employees less and less for their people skills as they climb the corporate ladder. The problem with this practice? Within each job title in the graph above, the top performers were those with the highest levels of emotional intelligence. Organizations shoot themselves in the foot when they promote people for the wrong reasons and fail to reward leaders for the skills that matter most to their performance.

Empathy problems aren’t just seen in the educated and wealthy. If most middle managers were great at empathy, their bar in the graph above would sit closer to 100. The educated, wealthy, and high-status people in Klaus’s study were less empathetic because they perceive themselves to be less dependent upon other people. The same could be said for any person with a strong sense of independence. That might explain the aloofness many successful people exhibit, perhaps even the person staring back at you in the mirror.

If we’re honest, we all can probably think of times when we’ve failed to pick up on the emotional tone of a conversation or the mood in the room and therefore delivered a tone-deaf response. Here are three simple ways to improve your “hearing” of emotional tone:

1. Step into Their Shoes.

In Kraus’s study, even the upper-crust participants proved perfectly capable of detecting other people’s emotions when the participants were asked to imagine themselves on the lower rungs of the socioeconomic ladder. The ability to understand another is at your fingertips anytime you want it. Just ask yourself, “If I were in his or her position, how would I feel in this situation?”

Striking the right tone often involves nothing more than mirroring the other person’s emotions. Sometimes this means putting on a sad face when someone else is visibly sad. Other times, it means a smile to match the other person’s smile. When people are excited or happy, they want others to be excited, too. However, when that same person pours her heart out about a painful blow she’s just been dealt, the last thing she wants is for Chipper Charlie to come skipping onto the scene to tell her to turn her frown upside down.

You don’t have to be perpetually dishonest or disingenuous with your emotional expressions. If you truly focus your attention on wrapping your mind around the other person’s experience, you’ll naturally mirror others’ emotions. Even a brief recognition of how the other person is feeling (“I know this must be really tough for you” or “Wow, that is exciting!”) goes a long way.

3. Ask and Ye Shall Receive.

Sometimes even the world’s most emotionally intelligent people are stumped or at least uncertain about what another person might be feeling. There is a simple, often overlooked solution to discovering how another person is feeling: Ask. It’s easy to make emotional intelligence more complicated than it is, and often a powerful solution is sitting right under your nose just waiting for you to spot it.