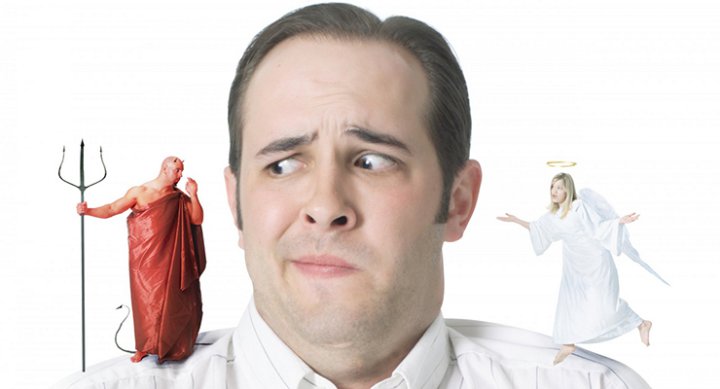 Given the right circumstances, good people can get caught up in some very bad things. More often than not, psychology is to blame.

When it comes to unethical behavior, good people don’t tend to go right off the deep end like Bernie Madoff or Kenneth Lay. Rather, the mind plays tricks on them, pushing them down the slippery slope of questionable behavior.

“Integrity is doing the right thing, even when no one is watching.” –C. S. Lewis

Dr. Muel Kaptein, Professor of Business Ethics and Integrity Management at the Rotterdam School of Management, has studied bad behavior for decades. A study he recently published sheds considerable light on what motivates good people to do bad things.

What follows are 14 of Dr. Kaptein’s most compelling findings into how the mind tricks good people into losing their moral compass and going astray.

1. The compensation effect. The compensation effect refers to the tendency for people to assume they accumulate moral capital. We use good deeds to balance out bad deeds, or alternately, we give ourselves breaks from goodness, like a piece of chocolate after a week of salads. This makes people more inclined to do bad things under the guise of “I’m a good person” or “It’s just this one thing.” A great example of this is a study in which people were observed lying and cheating more after they made the decision to purchase products that were good for the environment.

2. The power of names. What you name something is important, as it can skew people’s sense of reality. If companies assign unethical practices simple and humorous euphemisms (like “financial engineering” for accounting fraud), employees are less likely to take their unethical behavior seriously. Thomas Watson, the founder of IBM, was famous for saying, “Doing business is a game, the greatest game in the world if you know how to play it.” Something as simple as calling business a game can make people less likely to see that their actions have serious, real-world consequences.

4. Broken window theory. The broken window theory argues that chaos and disorder in an organization make people believe they work for an ineffectual authority. In response, they are more likely to commit unethical behavior that’s in line with this perceived chaos. An example of this was when Mayor Rudy Giuliani lowered major crime rates in New York City in the 1980’s by cracking down on petty crime. Living in a city that was less riddled with crime, New Yorkers came to believe in the organization running their city, which slowed the rate of major crimes.

5. Tunnel vision. There’s nothing wrong with setting goals and driving hard to achieve them. This only becomes a problem when people are possessed by a singular focus on a particular goal, to the point that they leave other important considerations such as compassion and ethics out of their thinking.

6. The Pygmalion effect. The Pygmalion effect refers to the tendency people have to act the way that other people treat them. For example, if employees are treated like they’re upright members of a team, they’re more likely to act accordingly. Alternately, if they’re treated with suspicion, they’re more likely to act in a way that justifies that perception.

8. Obedience to authority. It’s quite difficult for most people to ignore the wishes of those in authority positions. People also feel like they’re less responsible for wrongdoings if they act under the direction of someone else. Both of these reasons explain why employees are likely to act out the unethical wishes of their supervisors—and feel far less guilt than if they had decided to do it themselves.

9. Winner-take-all competition. We live in a society where there is often only one winner: one person wins the prize, one person gets the job, one person receives the credit. But does this competitive culture really produce the best outcomes? When it comes to ethical behavior, the answer is no. When there is only one winner in a given situation, people are more likely to cheat rather than face the consequences of losing.

10. Social bond theory. Employees are more likely to be loyal to their companies if they feel unique, valued, and important. The more they feel that they’re replaceable and underappreciated, the more likely they are to commit ethical violations.

11. The blinding effect of power. People in power typically see themselves as inherently different from their employees. This can lead them to set ethical boundaries for their employees that are more stringent than the ones they set for themselves. What happens next is the stuff of newspaper headlines.

12. Conspicuous consumption. When companies splash money around, they contribute to unethical behavior. Flashy displays of wealth lead to increased selfishness. Employees either aim hard for these carrots or develop jealousy of their high-rolling colleagues who achieve them. This leads to people who are more likely to put their own needs ahead of doing the right thing.

13. Acceptance of small theft. One might think that taking small things from the workplace, like notebooks, pens, and computer paper, is harmless. But when small thefts are ignored by management, people become far more likely to up the ante.

14. Reactance theory. People like their freedom. If they feel that the rules imposed on them are too strict or too restrictive, they often break those rules—and even go further against protocol than they otherwise would have.